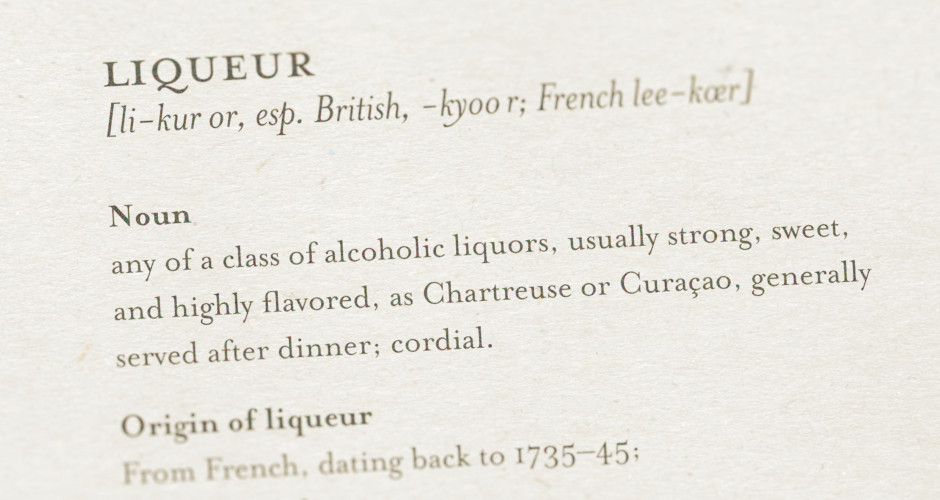 Where does the word "liqueur" come from?

To completely understand where the word liqueur comes from, you first need to know what a liqueur actually is. Why? Because, for example, ‘liqueur’ is not the same as ‘liquor’ which sounds almost similar. But don’t let that fool you, the difference is quite a bit bigger.

Although both are ‘distilled spirits’ that contain alcohol and are crucial ingredients when mixing cocktails, the terms are not interchangeable. The main difference between the two is that liquor is not sweet, while liqueurs are (generally spoken). Liqueurs are used as flavoring agents in mixed drinks but are perfectly enjoyed on their own as well. However, many liquors are available in flavored forms, which just adds to the confusion. Also, liqueurs tend to have a lower alcohol content than liquors because of the additives but, to make it more difficult, that is unfortunately not always the case. So, potency is not always the distinguishing factor. If you really want to dive into some educational stuff about the difference between liqueur, liquor, cordials, and spirits, you can read all about it here.

But now the big question: where does the word liqueur actually come from?

Liqueurs have been around for many centuries. Recipes for liqueurs have been found in Egyptian tombs and ancient Greek scrolls, but it is primarily the monks of Europe, particularly Italian monks during the 13th Century, who developed the liqueur as a way to infuse herbs for medicinal use. At the time – in the middle ages – drinking liqueur was also a common custom during signings of treaties!

As the trade routes opened, the variety of spices and other ingredients, such as ginger, orange, and chocolate, made their way into liqueurs, and many households had their own distillery and recipes. This is exactly how our own Senior Curaçao Liqueur was born; in a drugstore called ‘Botika Excelsior’ on the Caribbean island of Curaçao. Some recipes were used for their anesthetic qualities and used by women during childbirth, while others were drunk as a digestive aid. They also became fashionable. After Catherine De Medici wed Henry II of France, she introduced the culture of liqueur drinking to the French Court.

Notable liqueurs around the world

After having read all this, it wouldn’t surprise you that liqueurs are amongst the oldest category of alcoholic beverages. One of the most famous liqueurs is Green Chartreuse, which was developed by monks from Carthusian order in the French Alps since 1737. It contains over 130 herbs and spices, some of which are rare, and only three monks know the full recipe, and which herbs produce its unique, natural color. Another notable brand is Frangelico, which is a liqueur made of hazelnuts. Whilst its official brand creation was in the 70s, its recipe claims to have a 300-year old heritage. Although the history of Senior’s Genuine Curaçao liqueur doesn’t go as far as the one of Green Chartreuse, Senior & Co. produces its Curaçao liqueur since 1896. Senior & Co. is also the company behind the world-famous Blue Curaçao Liqueur. If you want to read more about the production process of our Senior’s Genuine Curaçao Liqueur, you can read all about it here. Of course, we’d also love to see you pay us a visit and follow one of our distillery tours at Landhuis Chobolobo – home of the Genuine Curaçao Liqueur.